Robot vacuum cleaners have started to appear recently, as a real luxury product. A smarter one could even cost the price of a second-hand car so only few could afford to buy one in our country. Not to mention, that advances in technology and the efficiency of vacuum cleaners at that time left much to be desired. It was about 2-3 years ago when cheaper, Chinese brands started to spread. It also included the first-gen Xiaomi MiJia robot vacuum cleaner launched in September 2016. It became at once the best-selling vacuum cleaner, because compared to its price it  was able to do much more things than the cleaners of competitors for higher price. It is no wonder that since its launch it has become really popular in its domestic market and also in a lot of other countries in the world. Hungary was no exception, either. A year later, another sub-brand was released, it was named the Roborock Sweep One. It featured wet mopping and expanded mapping, path planning modes. Then, at the beginning of March 2018, the third Xiaowa Cleaner came out, which is the cheapest one of the Xiaomi Eco-system (in its domestic market). It comes not only with all the features of more expensive cleaners but its dust box capacity is the same as that of the third model.

We have reported about all the three robot vacuum cleaners in details and also written and video tests were made (use the browser if you are curious about them). On top of that, the third one’s comparison in video form is underway, of course in helloxiaomi exclusive version.

Today, the company announced officially that it is going to launch a new Xiaomi robot vacuum cleaner on 8 May. 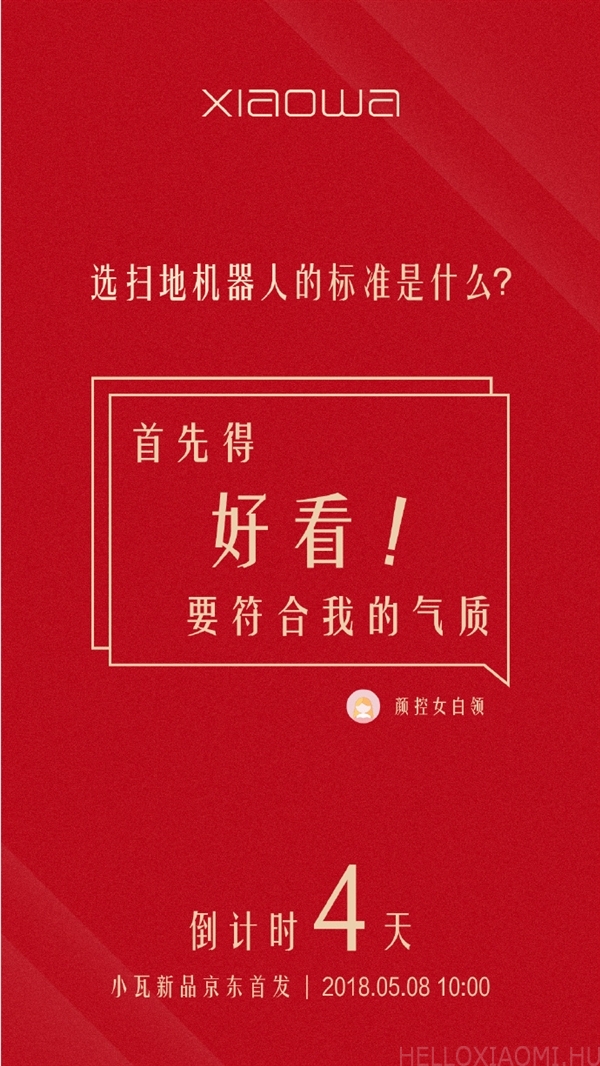 As it also turned out from our tests, smart cleaner are getting more and more efficient nowadays and on top of that the development of artificial intelligence opens up new horizons.

Interestingly enough the first-gen Xiaomi MiJia vacuum cleaner  got a ranking of 9.1 at Akku-und-Roboter-Staubsauger.de which was enough for the first place in the category of robot vacuum cleaners cheaper than 400 EUR. It can really persuade us to buy one as it even surpassed the well-known iRobot Roomba 980.

The manufacturer’s first poster only informs us about a date and some information about themselves but no other details are known for the time being. May the new model come with good price, but also equipped with room map and LSD?

Write your guesses as comments.