Pocophone F1, the Poco first model, Xiaom’s sub-brand has become really devisive. Besides getting the most powerful processor of Snapdragon, SD 845, in terms of material the manufacturer chose a substantially cheaper solution and instead of a scratch-resistant glass it got a plastic back cover. Many features favoured by lots of users were left out (NFC, Dual GPS, QC4+…), but on the other hand others were favoured by a couple of useful features (FM radio, expandable micro SD, infra port, jack plug, bigger battery…) However, we shouldn’t forget that F1 is the cheapest Snapdragon 845 smartphone in the market at the moment (excluding some BrandZ). The most noticeable sign of cost-efficiency is its camera.

Although sample photos are not bad, they are far beyond the level of Mi8. AI is in vain if the sensor is weaker and it lacks optical image stabilization. As you could see in case of Mi 8, MIX 2s and Mi A2 tests they tried to give a real image of the cameras’ features without effects and changes.

Thanks to Kornél you can see sample photos by Poco F1 on helloxiaomi soon and I am also planning a Mi8 – Poco F1 comparison in the near future. Some weeks after Huawei’s new Nova 3i camera samples turned out to be fake (with DSL shots promoted the mobile’s camera features), now it turned out about a promotional image of Pocophone F1 that it is also a fake.

As opposed to Huawei (which used DSLR in the second time in a deceptive way), in case of Poco F1, it wasn’t DSLR but the camera samples of another Xiaomi phone.

Xiaomi’s spokesman , Donovan Sung promotes the new POCO F1 on all community platform. He posted an image on Instagram with an electric scooter stating that the photo was taken by a  POCO F1 smartphone. 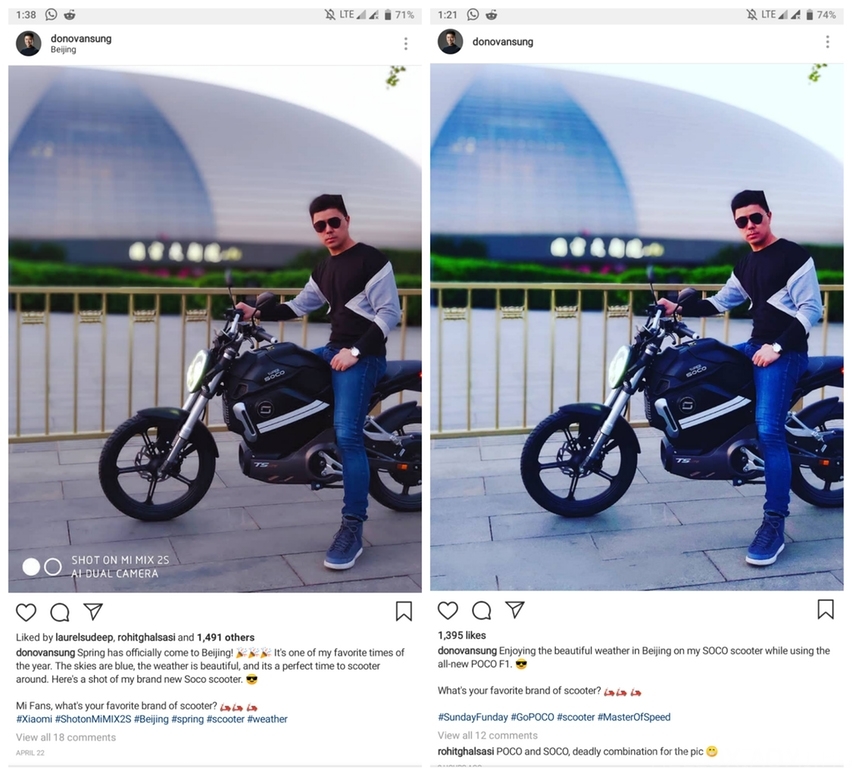 That was like the pot call the kettle black as some Reddit users noticed that that the camera sample is the same as an earlier one. In this way the guy was caught on cheating that he posted the same photo as he took at the beginning of the year to promote Mix 2S. The original photo taken by the spokesman earlier contained the watermark of Mi Mix 2s while he cancelled the watermark on this ‘Poco photo’. You don’t have to have eyes like a hawk to notice the difference. In the photo he is shown on an electric scooter by the ‘dear’ Soco company (which earlier removed my article) and he is probably wearing Xiaomi shoes, jeans and sunglasses and perhaps even his writstwatch is by Mijia 🙂

On the whole, both photos are said to have been quite bad quality. Perhaps some kind of filter was also used in case of MIX 2s. The one promoting Poco F1 must have got a Vivid filter.

We hope that there will be no more fake camera samples!