Xiaomi models have appeared with several codenames in the past few months. Most of them have already been launched such as Mi 6X, Redmi S2 or the new-born in the gamer phone branch, the Black Shark. Mi 7 (or 8) is also coming out soon and we can expect Mi Max 3.

We have already mentioned that after a two-year-pause, the manufacturer makes again MediaTek processors. Several sources and test results have also proved that we can expect mid-range phones with newer MTK SoC. Most of you are perhaps against this step but this prototype is probably not expected to be available in Europe or globally. They can save on different patent or licence fees and on processors themselves if they do not use Qualcomm, in this way they can be a cheaper competitor of rivals in China, Indonesia and in developing countries. Since Xiaomi took the lead over in India, Samsung has been making an effort to get back its former position so they are trying to gain customers with lower range smartphones. There is a lot at stake since the Korean manufacturer also lost its second biggest market after China.

There has been no news about the custom Surge S2 processor while we have got information about MediaTek and Qualcomm Snapdragon next-gen processors almost every week. Perhaps they have put this project on hold, haven’t they?

Let’s see what we got to know from GeekBench data. 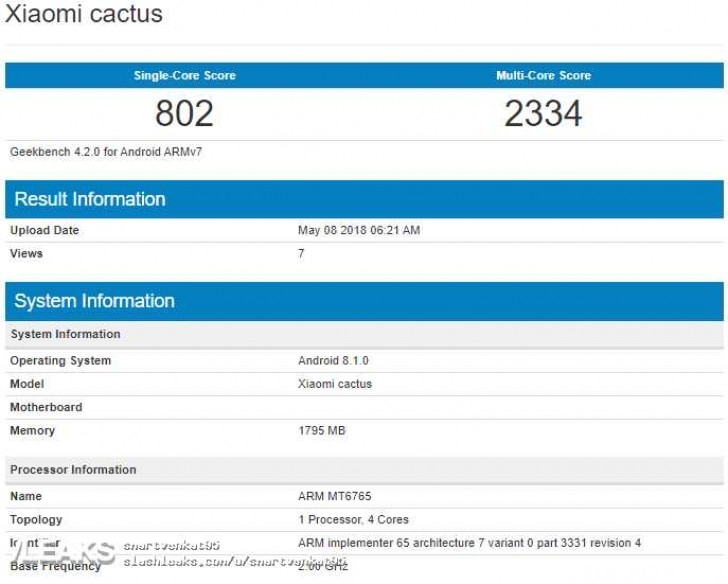 The new phone is codenamed “Cactus”. According to the data, it sports Helio P40 (ARM MT6765) chipset clocked at 2GHz. The four-core SoC has scored 802 points in single-core and 2334 points in multi-core tests. The good results are a bit in the shadow of 2GB of RAM. Unpacking from the box, it is running on Android 8.1.0 and the latest MIUI 9.x. As there is not yet  official confirmation, an Android Go version cannot be excluded, either. Android Go would be a better choice than Helio P40 because of the upcoming MIUI 10 and expected updates and also considering the 2GB RAM memory. After the launch of Redmi S2, “Cactus” must have a really honest pricing on certain markets. Based on the info from the chart, this prototype is already in the manufacturing phase so it may still be launched in 2018 Q2.